Consensus Economics, the world's leading economic survey organisation, has announced the recipients of its 2015 Forecast Accuracy Award (FAA). The FAA program recognises the achievements of a select group of expert country economic forecasters who have most accurately predicted the performance of GDP growth and Consumer Price Inflation for their targeted economies over a 24 months forecasting cycle.

Swiss Life Asset Managers’ economic research team has won this year’s Forecast Accuracy Award (FAA) for Switzerland. Out of a sample of more than 15 panellists, our forecasts were the best in predicting the final outcomes in a year in which economic data were heavily influenced by the Swiss National Bank’s (SNB) decision to abandon its minimum exchange rate policy.

Marc Brütsch, Chief Economist, says: “Part of our success goes back to the fact that we already had a prudent forecast for growth through 2015 prior to the SNB move. Thus, luck plays a role here. But, it is also exciting to observe that our adjusted base case scenario for inflation and GDP growth following the currency shock played out well. Immediately after January 15, we expected an average exchange rate of 1.05 versus the Euro through 2015 and no recession. And this is what we’ve got.”

Swiss Life Asset Managers’ forecasts for GDP growth in Switzerland this year and 2017 remain below the Consensus forecast as our economic research team sees moderating dynamics in domestic areas like private consumption, construction activity and also government spending. The inflation forecast is highly uncertain due to the important swings in the oil price as of late. Swiss Life Asset Managers expects annual inflation rates to return into positive territory by the final quarter 2016.

The methodology applied by Consensus Economics to evaluate forecasting accuracy of the individual panellists can be found on the firm’s website. 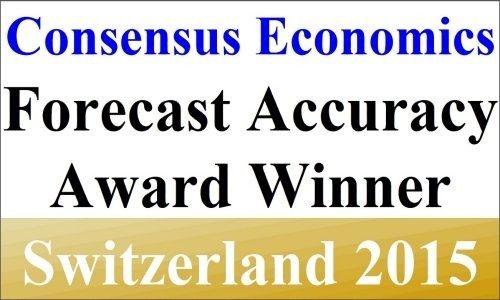